‘There is a strong sense of both the vulnerability and tenacity of humans in our world.’

Artist, Stephanie Fawbert, sits down with us at the VAA to discuss how she represents the complexity of nature in her sublime paintings.

Steph Fawbert’s work demonstrates the juxtaposition between humans and nature. By capturing small figures in the sublime landscapes, Fawbert demonstrates the way we are connected to the larger world around us.

What have you accomplished over the last 12 months? 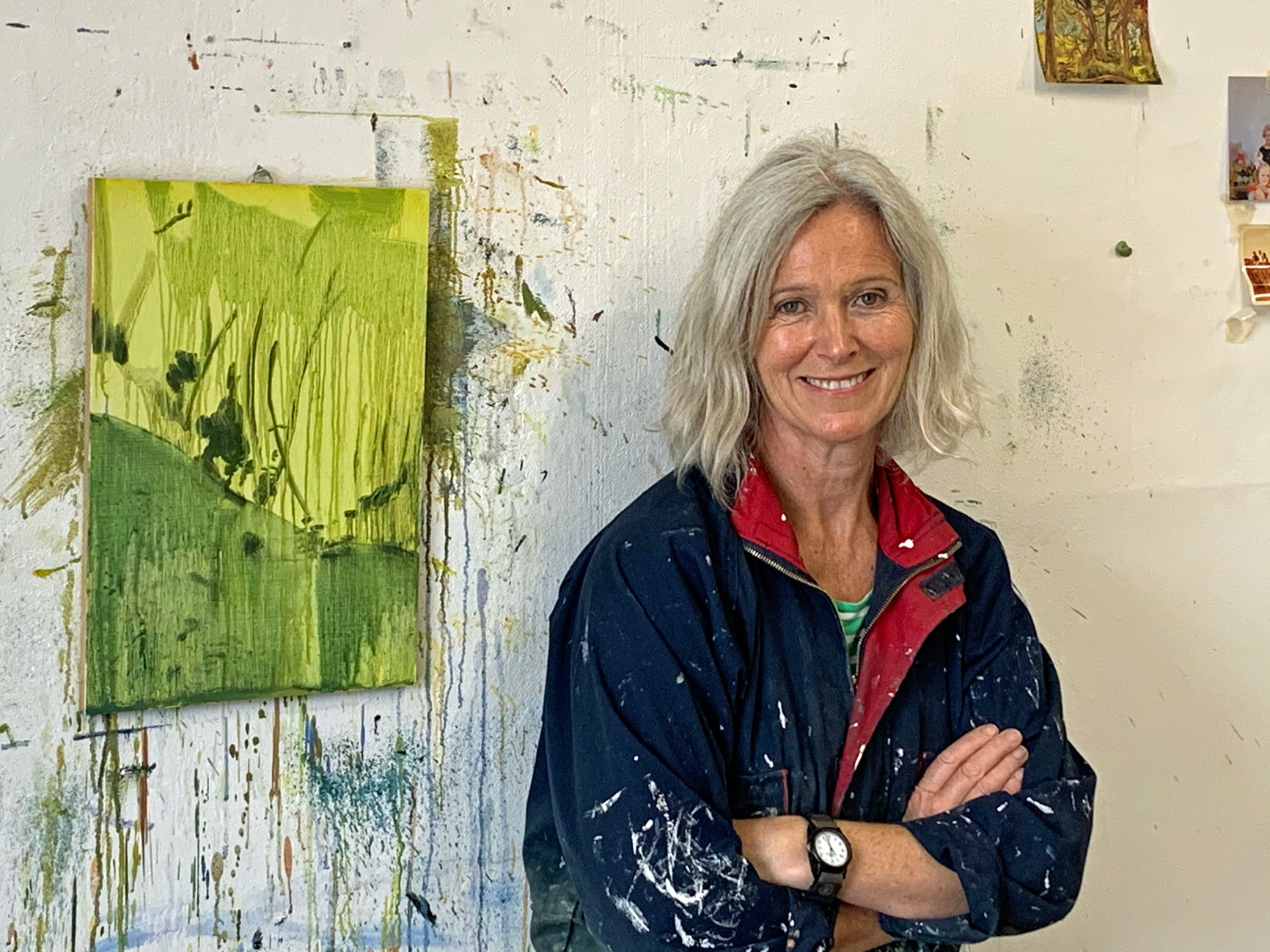 I’ve had a busy time in the last 12 months; I was long-listed for a painting prize, I exhibited at The Royal Academy Summer Exhibition in London and at the Glyndebourne Opera House.

In March 2021, I was longlisted for the ‘Jacksons’ Painting Prize’ with my painting ‘Rural Fair’ and was featured in Jackson’s online exhibition. As an emerging artist, I think it’s a good idea to enter competitions as it helps to slowly raise your profile. It’s always tough to face rejections but worth it when you get in one!

Last year’s Royal Academy Summer Exhibition, curated by Yinka Shonibare had the theme of ‘Reclaiming Magic’ and my painting, ‘Italian Villa’ was accepted: The painting depicts a landscape at dusk with a spotlit table laid out for a feast, but no one is there; there is a sense that something is about to happen. All artists in the show were invited to the Varnishing Day which was traditionally when Royal Academicians stopped making final adjustments to works already up on the wall and varnished them. It was a private viewing just for the artists. This was part of the fun of being in such an old and established show.

I live in Sussex and Glyndebourne Opera House promotes contemporary visual art alongside Opera. I was lucky to be one of 16 local artists invited to exhibit there, in October, in the show ‘Fairground,’ to celebrate art and artists in Sussex.

Finally, in September I co-curated a painting show in my hometown of Hastings for the South Coast Artists collective of which I am a member. I also exhibited in the Rye Contemporary Art Society’s summer exhibition and opened my studio as part of the Coastal Currents Art Festival.

For me, inspiration begins by being outside in nature.

I walk outside with my camera. I am on the lookout for scenes that chime with the current themes of my work around the figure in the landscape. I look for tall trees, big views, the sea… things that dwarf, surround, and enfold me.

Back in the studio I print out photos and begin to imagine paintings that could come from the images.

Next, I ‘get to know’ the image by doing simple studies in my sketchbook. Here, I begin to work out the composition of the final painting. I make decisions by trying things out. Putting figures in, removing them, taking elements from more than one photograph, i.e. using photos as a starting point but adapting them. I ask would the composition work better as a landscape, portrait, or square canvas? How big/small do I want the figure to be in the piece? What will be the predominant colours in the painting?

Then, I tend to do a small study on a board primed with gesso. It is at this point that my initial idea becomes something more real, something concrete and it is also at this stage that some ideas are completed.  Often, I will paint several versions of an idea, experimenting with colours, textures and size. A handful goes on to become much larger paintings that are worked upon canvas, sometimes taking many weeks to complete.

Do you have a particular outlook that guides you?

As reflected in my work, I want to suggest that to live fully; humans must interact and face the hazards as well as the gifts of the world around them.

In my compositions, tiny figures teeter on cliff edges, or traverse snowscapes, pause by forest streams or scramble up trees. It is these interactions that interest me. I find deep solace and beauty in nature. I love the juxtaposition of humans and nature which emphasize that we are not separate, but part of the world.

My paintings deal with memory and with our connections to place and our human relationship with the natural world. Much is made these days about humans belonging to and being part of the natural world rather than seeing it as something other, to be exploited and ’consumed.’ In my work, humans are enfolded by nature, dwarfed by the landscape, and immersed in the world around them. There is a strong sense of both the vulnerability and tenacity of humans in our world.

In his poem, Sic Vita, the poet Henry King wrote of our lives being ‘borrowed light’ that is ‘fast called in and paid to night’. I want my paintings to express this sense of brief wonder. Don’t we all sense this, in our moments of happiness?

What do you find hardest about improving your art profession?

I’m not naturally a self-promoter so I find marketing difficult. The fact is that nobody else is going to do it for you so you might as well give it a try, look for opportunities, ask for things. People can only say ‘No’ and sometimes they say ‘Yes’. Like many artists, I have really benefited from Instagram. Some of my biggest supporters found me through The Artists Support Pledge and then went on to buy several paintings not included in ASP.

My current challenge is to keep my work evolving and developing. There is such pressure to develop a particular style and brand that I think artists have to fight to keep their work fresh and new. I think the most important thing is putting in the hours of painting. Now that my kids are bigger this is beginning to get easier.

What advice has helped you most in your career?

There is so much advice that has helped me over the years.

Jeanette Winterson has given fantastic advice on the writing process which can be transposed to making art. She says ‘Turn up for work. Discipline allows creative freedom. No discipline equals no freedom.’ She also says ‘Trust your creativity’ which I think is essential. Making the work you want to make ensures that your work has both authenticity and integrity.

Another key piece of advice was given to me by a close friend when I was uncertain about taking on a bigger studio. She said, ‘if you don’t take yourself seriously, then who will?’ This spurred me on to move into my current studio which is large enough to make large paintings and therefore to extend my practice. I took myself seriously and it paid off!

Finally, what would you say to the artist you were a year ago?

Keep the actual creative practice at the forefront. It’s so easy to get bogged down with the administration.